Can you believe it?  Trex Runner has been downloaded 25,000 times!  So with that, I guessed it's time to do an update.  If you're not familar with Trex Runner it's the hidden easter egg inside Chrome browser. 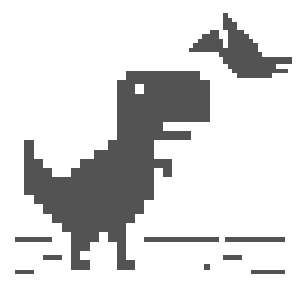 This easter egg is part of the Chronimum project open source libraries.   I didn't write the game.  I just wrote that android app that allows you to play the game.

I have a bit of trivia for you. In case you were wondering why a dinosaur game in Chrome?  Well, this little Tyrannosaurus Rex is displayed on the offline screen, at the point where the internet is unreachable.  Now think about a T-Rex and those short little arms.  Yep that's it.

It's now available in Google Play at https://play.google.com/store/apps/details?id=com.nellyfish.trexrunner